Home / About Us / Director of Institute 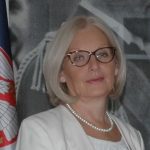 Dr Dragana Radojičić, a head of the Ethnographic Institute of the Serbian Academy of Science and Arts was born in Herceg Novi where she finished primary and secondary school. She graduated in 1984 at the Faculty of Philosophy in Belgrade at the Depar...

Multimedia Internet Portal “The Lexicon of Serbian Culture”, the Institute of Ethnography

“Cultural and Scientific Contacts: Serbs and Slovenians in the period from the 19th to the 20th century”, the Institute of Ethnography and Museum, BAS

“Cultural and Social Transformational Processes in Slovakia and Serbia”, the Institute of Ethnography of SAS, Slovakia

“Social Transformations after 1989”, the Institute of Ethnology of CAS, Czech Republic

“Ethnical Processes in the Slavic World after 1991-Everyday Culture in the Post-Socialist Period”, N.N. Miklukho-Maklai Institute of Ethnology and Anthropology of RAS, Russia

“Food culture in Vojvodina through Meals, Linguistic and Ethnological Aspect”, Department of Literature and Language of Matica Srpska, Novi Sad

“Cooperation Development and Research Competences Augmentation in the Network of the Ethnological Institutions“, Masaryk University, Brno

“Language as a Legacy of Culture in Ethnological and Linguistic Analysis of Serbia and Macedonia”, MASA and SASA

2014                       Interdisciplinary Research in Cultural and Linguistic Heritage of Serbia: “The Lexicon of Serbian Culture” as a model for conceptualization of the project “Language as a Legacy of Culture”, lecture given at the request of the Research Center for Areal Linguistics “B. Vidoeski”, MASA, Skopje

2008                       “Influences of Cultures of East and West on the Example of Clothing of the Inhabitants of Boka  Kotorska during the 18th century”,  Department of Ethnology and Anthropology, Faculty of Philosophy , Ljubljana

Association of Anthropologists and Ethnologists of Russia

Member of Interdepartmental Board for the Study of Minorities and Human Rights, SASA

Member of the International Ethnological Film Festival Council in Belgrade

Author of six monographs and author of over hundred scientific papers