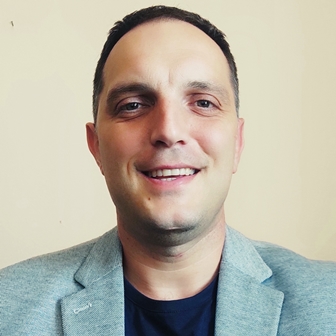 Fields of interest: minority cultures, anthropology of masculinity, identity, traditional and contemporary culture with a regional focus on the Polimlje and Potarje area.

Branko Banovic was born in Pljevlja (Montenegro,1982) where he completed his primary and secondary. He completed his studies of ethnology and anthropology at the Faculty of Philosophy, University in Belgrade (2005). He received his master's degree (2007) and his doctorate (2010) from the Department of Ethnology and Anthropology at the Faculty of Philosophy, University of Belgrade. The anthropology of folklore was the main field of his magisterial thesis, and his doctorate was in political anthropology. He acquired the rank of research associate at the Institute of Social Sciences in Belgrade (2015) and five years later he obtained the same academic rank at the Faculty of Philosophy, University of Belgrade. From 2008 to 2021, he has worked in different positions at the Regional Museum of Pljevlja (museum documentation, curator of ethnology, director), where he reached the rank of museum advisor in a very short time (2014). Considering scientific advancement a never-ending process, he constantly acquires new knowledge, conducts scientific research and publishes scientific papers in the field of identity, political anthropology, gender studies, multiculturalism, cultural heritage and history of the Western Balkans, as well as papers dealing with theory and methodology anthropology. Starting from the perspective of contemporary anthropology, in his research projects he has encompassed various topics: from the analysis of corso as a peculiar phenomenon of spatial behavior, the study of city humour in the light of anthropological studies of folklore narratives, the study of masculine patterns of the Montenegrin patriarchal tradition, to the analysis of anthropological and identity aspects of the debate over Montenegro's NATO membership, controversies over the first Pride Parade in Montenegro and the cultural conditionality of Covid-19 responses. He has published three monographic studies and several scientific papers. Banovic’s monographic study “The Montenegrin Warrior Tradition: Questions and Controversies over NATO Membership”, published by the publishing house Palgrave Macmillan from New York, has been especially successful. The author of the preface to this book is the Norwegian anthropologist Thomas Eriksen. Under the heading “Guest Editorial”, Banović published an article on the first page of the influential anthropological journal “Anthropology Today” (RAI). Among reviews that have been written about his scientific work, the critical review by Andrew Wachtel and comments by Michael Kimmel and Matthew Gutman, stand out with their significance. Banović has presented his papers at many influential international conferences, and when it comes to international exchange programs, he is an alumnus of the prestigious International Visitor Leadership Program (IVLP). Branko Banović is married and the father of two children. Banović's current scientific interest covers the following areas: minority cultures, anthropology of masculinity, identity, traditional and contemporary culture with a regional focus on the Polimlje and Potarje area.